Think Before You Flush Launch 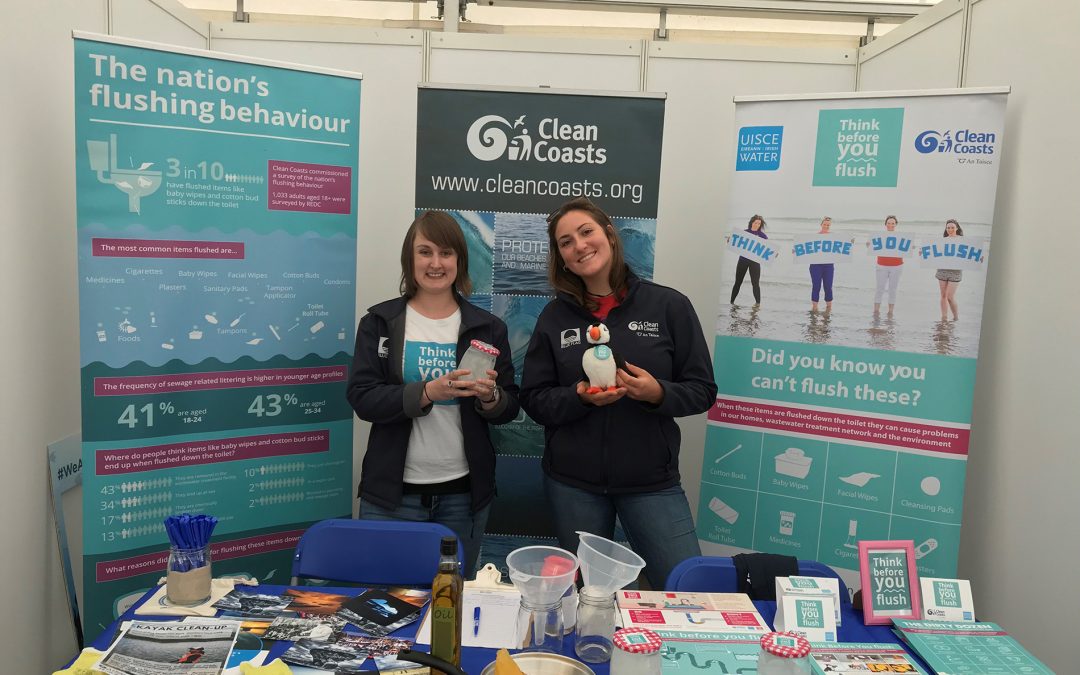 Think Before You Flush

Tackling the Problem of Sewage Related Litter on Ireland’s Beaches

June 8th World Ocean’s Day: Clean Coasts and Irish Water today launched Think Before You Flush, a campaign aiming to tackle the problem of sewage related litter on Ireland’s beaches. Think Before You Flush is a public awareness campaign about the problem sanitary products and other items can cause in our marine environment and our wastewater systems if they are flushed down the toilet.

Every day people flush thousands of sanitary items such as baby wipes and cotton bud sticks down the toilet instead of simply putting them in the bin. Other items that are frequently flushed down the toilet include cigarette butts and plasters.

Cotton bud sticks can pass through screens at wastewater treatment plants and are a common marine litter item found on Ireland’s beaches. The majority of cotton bud sticks are made of plastic, persist in the marine environment and can be mistaken as food by seabirds.

Speaking at the launch of Think Before You Flush, Annabel FitzGerald, Coastal Programmes Manager, An Taisce said, “The Think Before You Flush campaign through education and awareness aims to prevent items like cotton bud sticks washing up on Ireland’s spectacular beaches.” She added that, “During Clean Coasts Big Beach Clean in September 2014, a total of 1,191 cotton bud sticks were found on 103 beaches. By making small changes in our flushing behaviour we can prevent the harm caused by sewage related litter in the marine environment.”

90% of those surveyed agreed that seeing sewage related litter during a visit to the beach would disgust them while 84% of those surveyed agreed that if they knew that the items flushed down the toilet could end up being discharged into the ocean and could pollute our coastline and cause potential health risks they would not dispose of items in this way. This type of marine litter is totally preventable by simply changing our flushing behaviour.

Commenting at the launch, Elizabeth Arnett, Head of Communications in Irish Water said “Irish Water is delighted to be supporting An Taisce in this initiative. One of our major remits is the provision of reliable wastewater treatment, but everyone has a part to play in ensuring our beaches and rivers are pollution free. Through this campaign we can work together to improve our local freshwaters and coastal areas”.

Marine Litter includes a range of materials which have been deliberately discarded, or accidentally lost on shore or at sea. It includes materials that are carried out to sea from land, rivers, drainage, sewage systems and even by the wind.

Clean Coasts commissioned a survey of the nation’s flushing behaviour. We wanted to find out; Who disposes of waste in this manner?; What Sewage Related Litter) items do they dispose of?; Why do people flush items down the toilet?; What can be done to encourage a change in behaviour?

We wanted to understand the nation’s flushing behaviour and to do this we used the following metrics:

1,033 adults aged 18+ were interviewed. Quotas were set and final data weighted to known national profiles of adults aged 18+ on age, gender, class and region to ensure that the sample is representative of the total Irish population.

What did we find out?

The top items incorrectly disposed of are:

What are people’s attitudes to sewage related littering?

When it comes to encouraging people not to engage in sewage-related littering, 1 in 4 of the total sample suggest demonstrating the consequences of such behaviour is the way to go, with 1 in 3 who have done so endorsing this option.

Clean Coasts Ireland is owned and operated by the Environmental Education Unit of An Taisce – the National Trust for Ireland. It is funded by the Department of the Environment, Community & Local Government, Coca-Cola and Fáilte Ireland. It has been operating in Ireland for 11 years and engages 437 Clean Coasts groups and thousands of beach users. The Green Coast award is also part of the Clean Coasts programme and is an award for beaches that have excellent water quality but may not have the necessary built infrastructure to be eligible for the Blue Flag award. www.cleancoasts.org

Irish Water (www.water.ie) is the new national water utility responsible for providing and developing water services throughout Ireland. Incorporated in July 2013 as a semi-state company under the Water Services Act 2013, Irish Water will bring the water and waste water services of the 31 Local Authorities together under one national service provider. The purpose of Irish Water is to safeguard water as a precious natural resource and to deliver water services in a way that protects the environment and meets the needs of all citizens and industry now and in the future.

Irish Water is a registered subsidiary company of Ervia (www.ervia.ie)