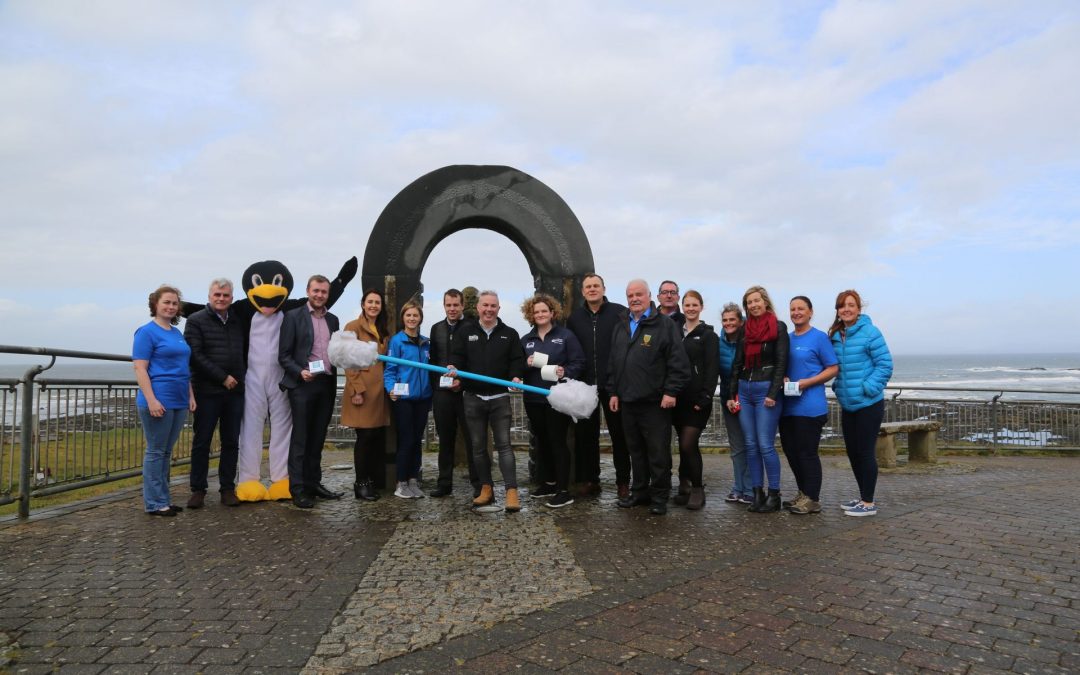 For a third year, Clean Coasts in partnership with Irish Water are running Think Before You Flush, a campaign aiming to tackle the problem of sewage related litter on Ireland’s beaches. It is a public awareness campaign about the problem sanitary products and other items can cause in our marine environment and our waste water systems if they are flushed down the toilet.

Not only does this campaign aim to raise awareness at a national level, there is also a strong emphasis on empowering communities directly to tackle the issues caused by sewage related litter. Bundoran became Donegal’s first Think Before You Flush community towards the end of 2018 joining 14 other communities around the country.

Since then a strong partnership between local Clean Coasts Officer, Bundoran Tidy Towns, Discover Bundoran and Donegal County Council has led the campaign from strength to strength with a large number of businesses adopting the campaign. The work continues with workshops for local schools including Magh Ene College and Four Masters NS, Kinlough as well as several projects and events with local community groups and individuals.

This fantastic effort by the Bundoran community, has brought together some of the local stakeholders to celebrate World Water Day on 22nd March 2019 and the achievements of the campaign so far.

“Bundoran has become a true ambassador for the Think Before You Flush campaign in Donegal. It is a wonderful example of the power of community action to create change. A special thanks should be given to our Clean Coasts Groups Bundoran Tidy Towns and Discover Bundoran for being true leaders in the community for this campaign,” says Beckey-Finn Britton, Clean Coasts Officer for Donegal and Leitrim.

Micheal McMahon, Chairperson of Bundoran Tidy Towns added, “we were delighted to become one of the ambassador communities for the Think Before You Flush campaign. We are also thankful to the number of local businesses who have engaged with us by committing to display the promotional materials on their premises. Being a seaside town it’s of utmost importance that both locals and visitors alike are aware of what they can and cannot flush down the toilet, ultimately affecting the quality of the water that rely on so much for our tourism product here in the town.”

David Friel, Coastal Officer for Donegal County Council said of the Think Before You Flush campaign, “It’s very appropriate that we are gathered here in Bundoran on World Water Day and encouraging locals, businesses and visitors to think before they flush. It’s heartening to see the amount of businesses who have embraced this campaign and who want to see their waters remain clean and safe for bathers, surfers and recreational users for this and many more seasons to come. For Bundoran to be chosen as the first Think Before You Flush community in the county is a testament to the trust that is placed in the community to ensure the natural amenity of the Atlantic Ocean is kept as clean and litter free as possible. We look forward to many more communities in the county joining Bundoran to think before they flush.”

Siobhan Sheil, Irish Water, added: “We’re urging all residents and visitors to Bundoran to ‘Think Before You Flush’, and to be mindful of the significant negative impact flushing inappropriate items can have on homes, businesses, the wastewater network, and the marine environment. Last year, there were more than 6,000 sewer blockages across the country. The size and scale of the impact of flushing the wrong items down the toilet is incredible. Irish Water has invested in wastewater infrastructure here in Bundoran and as a result has put a stop to the discharge of the equivalent of 9,600 wheelie bins of raw sewage per day into the sea. However, it is still really important that people recognise the impact of what they flush so the network can function efficiently and effectively. Placing a bin in the bathroom and disposing of sanitary items safely and appropriately has a hugely positive impact on the network and the environment.”